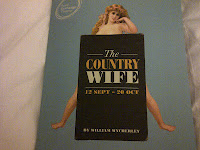 The Royal Exchange’s season opener is The Country Wife, written by William Wycherley in the 1600’s. A bawdy restoration comedy, considered so rude by some that it was not performed in its original form for almost 200 years from the mid-18th Century.

There are two main strands to the story. The first concerns the lothario Harry Horner, who persuades his Doctor to spread the rumour that he has been rendered impotent, therefore convincing the men of the town that he is no threat to any respectable society lady. He uses this cover story to work his charms on said ladies and have his wicked way with them, often with their husband’s unwitting collusion. The second strand concerns the Country Wife of the title. Jack Pinchwife, unaware of the false rumour, has returned from the country newly married, and wanting to keep his innocent wife Margery away from the corrupting influences of modern society, especially the notorious Horner.

The set that has been created for the performance is sparse and effective, although I am not sure I approve of the decision to have floor to ceiling scaffolding poles skirting the stage at intervals, perhaps suggesting the metaphorical cage that Pinchwife wishes to keep his wife in. Sightlines must be a difficult thing to judge in theatre in the round, and it’s an area that the Royal Exchange usually addresses very well, but sitting directly behind one of these poles was a little distracting to start with, although the mirror that completely blocked my view of the actors in the first scene was thankfully removed after that.

Whilst there are some darker complexities to this play, this production was very much played for bawdy laughs and it definitely delivered on that respect. However, especially in the earlier parts of the play, I did find that the text was delivered at such an energetic pace it was occasionally difficult to keep up. As the play progressed though, I found a lot to enjoy, with the second half being particularly strong.

The character of Mr Pinchwife I found to be the most interesting, and it was played well by Nick Fletcher. It must be quite a complex role to perform, initially we see the insecure side of his character, and you do have some sympathy for him, but in the later stage his neurotic jealously, controlling nature and cruelty become more apparent.

Oliver Gomm, fast becoming a Royal Exchange regular, as always delivered brilliantly on his comedic role as the foppish Mr Sparkish, owning the stage whenever he appeared. Amy Morgan was an excellent Margery Pinchwife, lively and engaging, really bringing out the less innocent and submissive elements of the character, and she had some nice asides to the audience that worked well without detracting from the main action. I also really enjoyed Maggie Service’s very humorous portrayal of Lady Fidget, the not so ‘respectable’ wife.

On reflection, I would have welcomed a few more elements of light and shade to balance the comedy with darker themes of the text, especially those of Mr Pinchwife’s character and actions. However, with lashings of bawdy humour enthusiastically delivered by an excellent cast, as a comedic outing I really enjoyed this performance, a solid season opener and an interesting choice.
Posted by Alison at 14:54