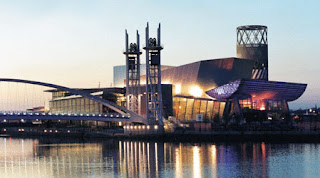 So, what is an excellent birthday present for a theatre obsessive? Maybe a backstage tour of one of her favourite venues? Well thanks to my membership of the Lowry’s Friends scheme, my spotting of a twitter competition, and some fortuitous scheduling on the Lowry’s part, that is exactly what I did on my birthday this year, accompanied by my lovely pal Michelle.

I didn’t know what to expect from this event. I assumed we would be given some kind of whistle stop tour of one of the stages and maybe a dressing room, and then be released back into the night, and I would have gone away happy. But what we got was so much more, a brilliant evening being shown around all the stages and many backstage areas, with heaps of fascinating information about the Lowry including the history of the spaces, the behind the scenes life of a theatre, the technical complexities of the various types of programming, the challenges faced in making the books balance whilst still providing a unique mix of funded and non-funded work, and even a bit of theatre superstition, all rounded off with a drink in the very lovely Quay Club bar, which I’d always been very curious about, but never in the privileged position to enter.

August is traditionally the time when many regional theatres are ‘dark’. Whilst there may be no programming on, it’s a very busy time for the technical team as its when all the spaces and equipment get serviced, tested, and generally spruced up, and, having seen a small part of what’s involved in this we were very lucky that Technical manager Dave and one of his colleagues were able to take time out from their busy schedule to join us and give us an insight into the hidden life of the theatre.

We started off in the Studio area, which began life as a non-theatre space (which explains why every time I visit the studio these days I get flashbacks to visiting a Cosgrove Hall exhibition there many moons ago). It has now been cleverly adapted into three extremely flexible spaces, the main Studio theatre and two other areas which are used for all kinds of things such as rehearsals, performances and private events. The three separate areas can even morph Transformer-like into one large room to host big events and functions. The Studio is the venue that I visit most often these days at the Lowry, it has an extremely varied and interesting mix of programming and I’ve seen some real gems there over the last few years. It’s also incredible value for money, with most tickets coming in under a tenner.

A ride in a service lift and a few labyrinthine corridors later (I think new staff must be issued with balls of twine and homing devices as standard), and we emerge underneath the Quays theatre. Now I’ve actually been here once before, as part of the Crypt Project, but this time it’s filled with banks of seats from the auditorium. I’ve only ever seen productions there with the standard set up (Proscenium Arch), but the ground floor of the Quays is completely flexible and can be converted to thrust stage, theatre in the round, or no fixed seats (in fact, we did get a top tip that the Library Theatre Company’s Christmas production of Arabian Nights would be using one of these alternative configurations which I think should make for an even more magical experience so get booking!).

Underneath the floor of the Quays is a very clever lift system that collapses into itself, allowing the seating banks to be removed, and some of these seating banks are actually ‘hovercrafts’ allowing them to be manoeuvred easily. Apparently all the seats can be removed and stored (as long as you do them in the right order!) in around an hour and a half, which seemed amazing.

After having a quick look at the stage of the Quays we exited the at the rear of the space into a large  area that links the two main stages at the Lowry, which has direct loading bay access, and from there walked on to the huge stage of the Lyric Theatre. It’s quite an awe inspiring sight standing on that stage and looking out at the vastness of the auditorium. However I was too busy listening to the fascinating facts, stories and insights being imparted by our tour guides (who seemed to have multiplied at this stage, but no one was introduced so thank you all whoever you were!) to remember to take a picture. 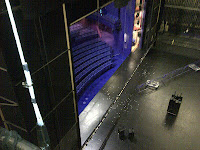 All too soon it was time to move on to the next stop on our itinerary for those who dared, an ascent of the fly tower. I was a little nervous at this juncture as my brain tends to have an unpredictable reaction to heights, but actually as we walked round the galleries that skirt the stage many feet up I felt completely comfortable, and fascinated to see the arrangements that allow backdrops, lights etc. to be moved in and out of the stage area. When we reached the very top of the tower however, where the floor is made up of a grid of bars through which you could see the huge drop down to stage level, I did find myself holding tightly to a girder for reassurance. Again sadly no photos, mainly as I knew if I dropped my phone it would not have stood a chance of surviving and might have taken someone out on the way down! 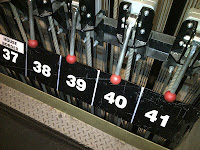 As we headed off to join the rest of our party in the Quays bar, we had a couple more stop offs, once in what my non-technical mind can only describe as the biggest fuse box you ever saw, and once to get a closer look at some of the lighting suspended above the auditorium. If you ever visit the Lyric Theatre at the Lowry, look upwards towards the ceiling from your seat, you may be able to glance a wire grid – apparently this is quite suitable for being walked on, but I have to say I’m not in a rush to test out that theory!

The Lowry team really put a lot into this insight into their work, and although the tour was around two hours long, I left wishing it could have been longer because it was so enjoyable and enlightening. I had learnt loads about the inner workings of the theatres, and it has made me appreciate all the more how lucky we are to have such an amazing arts centre and such dedicated staff on our doorstep. Thank you Lowry for an utterly brilliant birthday treat.

Email ThisBlogThis!Share to TwitterShare to FacebookShare to Pinterest
Labels: The Lowry