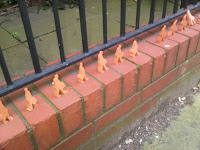 So I was walking to work on Wednesday morning, in my own little world, when something caught my eye at the side of the building. A curious artwork, little clay men commuters, all in a line heading to work.  There were more of them round the bottom of Robert Owen's statue outside my office. The security guard and I had a chat about them, he said he had seen more all over the complex, we both thought they were great, but a complete mystery. 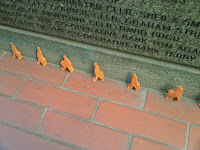 This is where the power of social media comes into play, I tweeted a couple  of pictures and within minutes one lovely lady had solved the mystery for me, it turns out it was an art installation called Human Resources. 8000 little clay men had been placed across the city centre overnight, and the public were encouraged to interact with the artwork.

Although I was one of the people who immediately went to ‘adopt’ some of them, and the public were actively encouraged to, I almost wish I’d seem more of them when they first appeared, they looked great in situ, lots of little worker ants on their daily commute. Although as pointed out by a pal, in that first picture you can see a rebel who has decided to go home!

But having said that, one of the great things about this project, was seeing how people did react to, and interact with, the concept as the day wore on, again mainly via twitter. Some little clay men had started office jobs, one had made it up the Beetham tower, one was in peril in a fountain clinging onto a rock, one travelled down for a day in London, and one had even acquired a Man City scarf! It is amazing how quickly a small piece of clay can acquire a personality and a backstory. 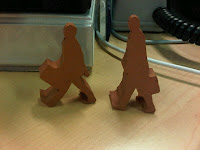 Meet my initial two adoptees- Happy and Grumpy. Happy looks almost excited to be going to work, he's going to nail that new client today, Grumpy looks like he's dreading the day, there's no joy left in his job, he's just going through the motions. I'm worried about Grumps and keeping a close eye on him! I went for a meeting mid morning and spied a third new friend, Colin – he’s quite mysterious and I have yet to discover his personality.

I have experienced something a bit like this in London once, a lot of small figures had appeared in Russell Square, although they were just standard stick people, not little clay commuters. The actual effort in placing them all overnight must have been quite something, and it was a fabulous thing to experience in Manchester. Thanks Lawrence Epps (the artist) and FutureEverything (the festival it was part of).
Posted by Alison at 15:38