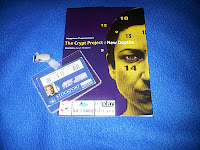 Well, Happystorm Theatre’s production of The Crypt Project turned out to be a fascinating night and one I will not forget in a hurry.

It was billed as a promenade performance, taking place under the Lowry Theatre, exploring elements of addiction and mental health. An email arrived on the day of the performance advising sensible shoes should be worn, adding to the anticipation and I really didn’t know what to expect.

Each performance was limited to an audience of 30. We met in the main foyer of the theatre and were then led back outside, round to the rear of the building and in through a service entrance. Our small group were then issued with hard hats, and further split into four teams who would be guided round the performance separately.

We spent the next hour being led through corridors, into under-stage spaces, into the theatre auditorium, onto and behind the stage. It was completely disorientating and an extremely intense experience. Sometimes we would pause to witness events, such as an exchange between two characters in a corridor, at other times you would catch glimpses of activity as you passed by. You could also hear other things happening that you never saw. From time to time characters would rush past you, or you would glimpse things happening in rooms or corners as you were led by, or sometimes the audience itself would become almost part of the performance. At one point I was sitting in the theatre, watching action on the stage, with an actor sitting next to me, observing and commenting on the events on the stage.

Each of the four groups went round separately but consecutively, occasionally joining with another group to witness elements of the piece, and all experiencing the ‘whole’ in a slightly differing order. It must have been a superhuman feat of logistics to organise, yet it ran like clockwork.

Because the groups were so small it was an incredibly intense experience, and a real privilege to be seeing quality performances at such close quarters.

There were four main characters – Daniel (Matthew Ganley) Frances (Susi Wrenshaw), Jeanette (Denise Kennedy) and William (Ian Curley) - as events unfolded you realised that all of them were dealing with mental health or addiction issues, some more immediately apparent than others, and you got glimpses into their lives, and what might have influenced those issues. But this wasn’t a linear story with a beginning, a middle and an end, and in my opinion it was all the more clever for that.

Daniel’s issues are the most immediately apparent, the kind of person you might avoid in the street, but as events unfold you start to see the complexities of his character and the interactions between him and Frances are extremely touching. The intensity and energy of Matthew Ganley’s performance was amazing to witness. Frances and Jeanette on initial impression are both confident professionals, but as the event progresses you see they are both extremely complex and vulnerable people. Susi Wrenshaw’s portrayal of Frances was extremely moving, especially in the ‘bathroom scene’ as her issues and vulnerabilities become clear. Ian Curley as William shows us a lonely man, struggling with life and past regrets, and of all the characters his left me with the most questions.

But the highlight performance of the night for me was Denise Kennedy’s Jeanette. When we first properly meet her, as part of her project team meeting, it was an extremely humorous performance, and one that I recognise all too well from my day job. However, when we next see her, as silent observers in her hotel room, her dramatic unravelling is shown in a quite breathtaking portrayal that had the audience gripped.

When we eventually emerged back out into the theatre foyer I had the sense of having experienced something very special that had my mind in complete overdrive for long after I had left the building. The cast, crew and creative team should be very proud of themselves, it was an extraordinary night out and I consider myself very lucky to have been part of.