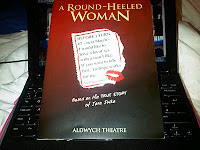 “Alcohol doesn’t solve any problems………….but then again, neither does milk”

The above quote was one of my favourite lines from A Round Heeled Woman, which we went to see on its last night at the Aldwych Theatre in London, but it’s from a play littered with memorable moments.

The booking was a last minute thing, I was down in London for the Christening of my lovely niece and nephew, and we decided to go down to the half-price ticket booth at Leicester Square to see what was available. I had seen lots of people complimenting Sharon Gless’ performance, and I knew the play had good reviews, but other than that I really didn’t know anything about it. As the play started, and the lead character, Jane, is starting to engage in phone sex, whilst I sat next to my parents and brother and cringed, I did get a bit worried! But the tension was quickly broken with a very funny breaking of the 4th wall and I was able to relax and enjoy what turned out to be a fabulous night out.

The play is based on a true story of Jane Juska, a lady heading for her 67th birthday who takes out a personal ad in the New York Times Literary Review saying that she would like to have ‘a lot of sex with a man I like’. We then follow some of her encounters, whilst also learning more about her life now and in the past, her damaged relationship with her son, and a clever twist where her experiences are compared with those of her favourite Anthony Trollope character Miss Mackenzie through interactions with the lady herself and some of her suitors.

Sharon Gless was outstanding in the role. I have to admit I only really knew of her as Christine Cagney and wasn’t aware of what a varied and accomplished career she has had to date. Her character is the central focus of the play and is on stage the whole time. She’s got great comic timing, but that’s only one aspect of a complex role. She gave a very ‘real’ performance which was in turns funny, touching and heart-breaking, and which had the audience completely taken along on Jane’s journey, particularly as they were regularly addressed which lead to a very intimate feel to the play.

The rest of the cast take on a number of roles during the course of the play and were all excellent. Beth Cordingly’s Miss Mackenzie in particular managed to engage the audience so well that there were shouts of encouragement and cheers when life finally started looking up for her!

All in all this was a well-constructed and ultimately life affirming piece of theatre, that I’m sure spoke to many people, not just 66 year old women. It was lovely to go to see a play I have no preconceptions about, and for it to turn out to be such an unexpected treat.