Well as I me 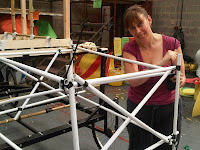 ntioned in my last post, I was off to the depths of Castlefield last weekend to volunteer at the WOW workshop which was getting some of the entries ready for the Manchester Day Parade, on Sunday 19th June. 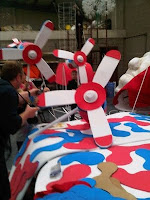 The theme this year is Voyage of Discovery, and everything has to have a connection to both the theme, and to the city. Walk the Plank organise these weekends for a few of the artists and community groups to get together and work on their entries, although there is also activity happening around the community as well. Last year there were 1700 people involved in the parade I think, and this year it is nearer 2000. Looking at some of the designs that were posted up in the corridor it looks like it is going to be even bigger, more colourful, and noisier than last year.

I had a bit of a nosey round the workshop and some of the things I saw being prepared were a huge Gulliver, a massive headless torso that I think might have been going to be a footballer, Amnesty candles, a massive dragonfly, some dark satanic mills and a gigantic recycling monster! 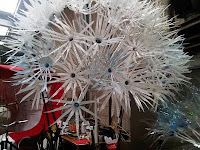 p I helped out with, Chatterbox, with the help of their artist Sarah, are making a large and colourful Lancaster Bomber. I did a lot of drilling (great fun) and securing, and was let loose with a glue gun. I have decided I want both a power drill and a glue gun now! I also helped make a frame for a steam train, and parts of a humongous dandelion seed head (out of plastic bottles!). The whole weekend was great fun and I’m hoping to go back and help again before the actual parade.