Lots to Look Forward to

There are lots of exciting things ‘culture’ wise going on in Manchester this year, and I am lucky enough to be involved in a couple of them – the Manchester Day Parade in June, and the Manchester International Festival in July. I am sure I will be blogging about them more in the coming weeks but I thought I would tell you a little bit about the first of them.

The first Manchester Day Parade was held last year. It’s a carnival style parade through the streets of Manchester, and its all about celebrating Manchester and its people. Its organised by a fabulous company called Walk The Plank, and supported by a number of sponsors, but one of the key features of it is getting various community groups and individual volunteers, involved in its creation.

In short, there is a theme for the event, and groups are invited to submit their ideas for what this could mean to them. Then, for those entries that get chosen, artists work with the community groups, and other volunteers, to turn those ideas into elements of the parade. Last year’s theme was ‘Out of This World’ - have a look at some of the amazing pictures in the gallery to give you an idea of the diverse ways in which this theme was realised. 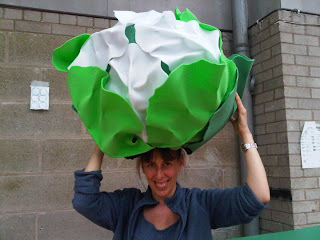 ed out with some of the making of the entries – I made a 9 foot beekeeper’s, thighs, his hands, some cabbage hats and helped with a huge Wicked Witch’s hat! It was really good fun, I had never done anything like that before, the other people I was working with were great fun, and it was exciting to see all the elements of the parade that were being created at the workshop. And that was just a tiny part of what came together on the day. 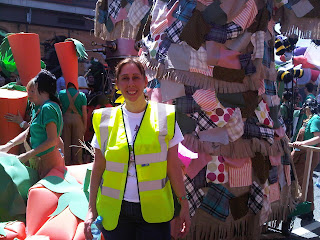 ay I helped out with dressing one of the groups, and then joined the parade as a marshal (in an extremely snazzy high vis jacket!!) . Walking round with the parade was amazing, so many people lining the route, and all of them smiling and having a good time, as were the participants; it made me so proud of my city.

I’m off to a workshop this weekend to help with the entries for this year’s theme ‘A Voyage of Discovery’ – I can’t wait to see how that has been interpreted.

I really would encourage anyone that can to come into Manchester on 19th June and experience the Manchester Day Parade for themselves; it’s a spectacular event, and an amazing atmosphere.