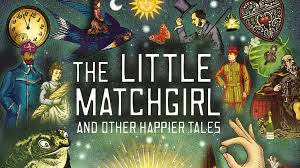 
Beautiful storytelling, magically told. In turns thought provoking and fun. Such a fantastic production and highly recommended.
Posted by Alison at 12:09