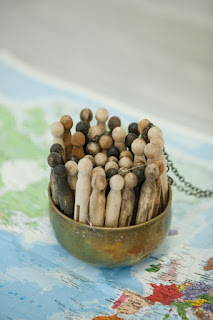 Blogging has taken a backseat of late. The first half of this year has been a bit of a whirlwind with various volunteering activities, work and studying, but Manchester International Festival's superb The Welcoming Party from Theatre-Rites demands a write up!

First of all I have to declare an interest. I was lucky enough to be a volunteer team leader

on this show, part of which involved me seeing every show I was scheduled on. My role in the show was basically a glorified doorstop but it was good fun, and fascinating to see tiny developments in the show as it ran. In total I saw the show 17 times, and I never got bored of it. But from the very first time I saw it, as an audience member at a closed dress rehearsal, I knew that this was a beautiful, important show and likely to be a festival hit once word got out. Friends, family and fellow volunteers then had to cope with me bullying them to get tickets, but all who did loved it!

Museum of Science and Industry's 1830s Warehouse, on Liverpool Road in Manchester. Set over three floors of this beautiful building, the show takes the audience on a journey, both literally and figuratively via a cleverly conceived mix of theatrics, puppetry, dance, music, and even a bit of martial arts. We meet a group of friends gathering together a 'welcoming party' for new arrivals to this country. As the show progresses we learn more about various members of the group's paths to these shores, experience the cold hearted and confusing bureaucracy of the faceless authority, touch on the reasons that drove them from their homes, but end in a feeling of hope that maybe we can make things betters those that come after them.

The show is so well crafted, blending the various styles of story telling, and moods of the

scenes perfectly. The cast of seven, Carl Harrison, Amed Hashimi, Michal Keyamo, Mohsen Nouri, Mohamed Sarrar, Clementine Telesfort and Emmanuela Yogolelo do an amazing job. The transitions between scenes are so smooth and the story telling so natural that the audience feels they are sharing the experience rather than just observing. The music used throughout is beautifully evocative and the set and staging is clever and very effective.

It's almost impossible to pick a favourite moment, all the elements were so well balanced and beautifully delivered. But the puppetry was a real standout for me. Even though I lurked at the back of the audience you would often find me edging forward for  Michal's story as there was so much detail put in to the movement of 'little Michal' , and even though the rooms were warm, the simple but effective way the horrors the Syrian refugee may have experienced were conjured never failed to send a chill down my spine. And the way that Amed's story was told via a series of gorgeous models contained within file boxes was just exquisite.

The show was billed by MIF in its programme as being for those over 8 and their families, which whilst true I think initially did it a bit of a disservice, as you may have assumed as an adult that it was not for you. But it worked on so many levels and was as suitable for adults without children, as it was for children and families. It was pitched at an appropriate level for children, stopping short of the graphic horrors, but it was thought provoking, moving, challenging stuff for all ages. And there was a good balance of light and dark, you never felt preached to, there were fun elements, but also elements that made you challenge your assumptions, threaten  tears, and widen your understanding. Younger audiences were engaged throughout and were ready to discuss the themes at the end, many of the adults left in tears (free hugs were available from the MIF volunteer!)

country that will be passed on to child refugees. The departing audiences, especially the younger ones, put so much thought and love into these messages, that were gathered on a wall, it was very humbling to see. I personally could barely look at the 'welcoming wall' as it kept setting me off crying (not a good look when you are supposed to be saying thank you and goodbye to departing guests and stopping them falling over the huge step on the exit door!)

It's hard to imagine this show in another location as the 1830s Warehouse suited it so perfectly. However, I really hope that it finds a life beyond Manchester as the messages it contains are so important and the piece is so beautifully realised that I would like
many more people to experience it. Theatre like this is important, relevant, powerful, and changes people. I feel so lucky to have been a very small part of it. 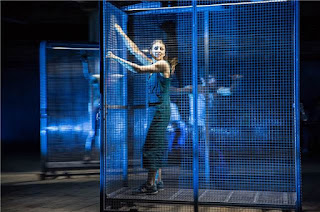