When the film of 42nd Street first came out in 1933 America was experiencing the Great Depression, with stock markets depressed, millions out of work and businesses closing. The film itself was a huge success, with its optimistic feel good tone, it allowed people to escape their troubles and revel in a world where the good guys succeed. Of course the world has moved on and we've all become wiser with no need to worry, but if for some strange reason one feels the need for a night of unashamed feel good glitz, glamour and full on showbiz, where you can forget all the troubles of the world for a couple of hours, then 42nd Street will definitely deliver.

This latest revival makes its intentions clear from the start. The curtain of the huge stage at the Theatre Royal starts to rise, and then pauses, revealing a stage full of feet energetically tapping away and filling the theatre with sound (helped by the clever tactic of lead dancers legs being miked! ) 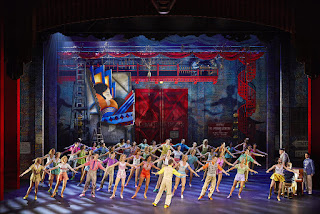 The story itself is well known, a new musical is being prepared, the livelihoods of many people depend on its success, a star (but not much of a hoofer) has been chosen, mainly to bring in the backing money of her paramour, but is incapacitated and at the last minute. Step forward a plucky and talented chorus girl who is thrust into the spotlight to save the show. But to be honest this show isn't about the story, it's about the songs, the spectacle, and the total dazzling glamour. Subtle it ain't, but who cares when the entertainment factor is this good.

The stage version is packed full of familiar songs (surprisingly the film actually only had four), and additional ones have I believe been added to show off the powerful voice of Sheena Easton playing the diva Dorothy Brock. Easton was excellent in the part, really nailing the comedic aspects of the role, and what a fantastic voice. Claire Hulse, as the out of town hopeful Peggy Sawyer, had a lovely eager innocence, and boy can that girl dance! 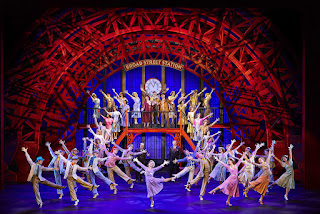 The huge stage at the Theatre Royal is used to full effect, the cast is almost 50 strong and in the many big numbers it is chock full of energetic and talented performers, coupled with beautiful and breathtaking costumes, and oh so much sparkle! Each big set piece seems to be trying to outdo those that have gone before. Particular highlights included a Busby Berkeley style number where a huge mirror reflected the overhead view of the dancers to the audience, and the largest and most glamorous staircase I have ever seen (also one of the only shows I've been to where the set got a gasp and a round of delighted applause from the audience) 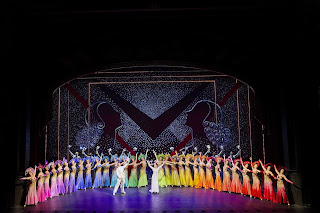 This is a show that is unapologetic about its intentions to entertain and dazzle, and sometimes in life that is exactly what is required. It's toe tapping, outrageously sparkly and totally feel good and I imagine sign ups to tap classes will be soaring as a direct result of this revival. Glamour with a capital G and so much fun. Pure escapism. 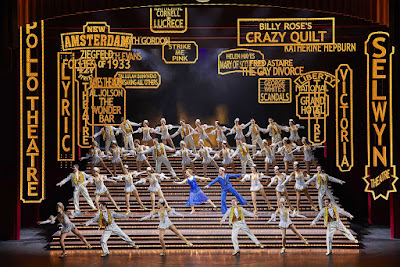