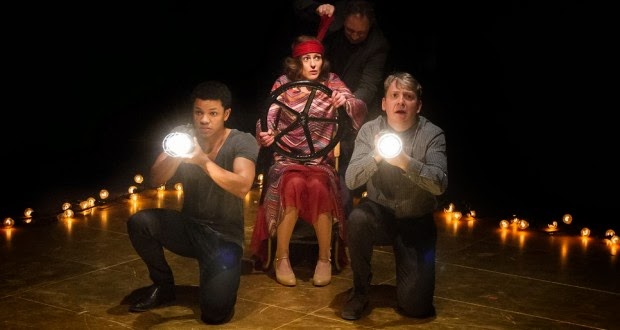 Based on the novel by Virginia Woolf and adapted for the stage by Sarah Ruhl, this is an unusual tale. It tells the story of Orlando, a young man in the 17th century, who has a string of relationships, including a brief dalliance with Elizabeth I and a passionate love affair with a Russian princess. After fleeing abroad, one night he falls into a deep stupor for a week, and upon waking finds he has been transformed into a young woman, a state he finds himself in, never aging, for the next 400 years, which we see through a snapshot of events and encounters that examine the ‘place’ of a woman in terms of gender roles and expectations, and the nature of love through the centuries. 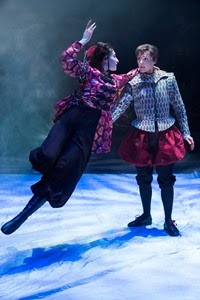 This is an energetic and fast paced production with plenty of humour. With the help of an excellent ‘chorus’ (Richard Hope, Thomas Arnold and Tunji Kasim) , who along with Orlando, provide narration, but also step in and out of the roles of various participants in events, forever with their tongues firmly in their cheeks, we romp through the adventures of the central character. There are a number of inventive and magical touches woven into the actions including puppetry, fantastical costumes, graceful aerial acrobatics, and gorgeous music, providing in part by on stage musician Hetti Price.


There are many layers to this tale, especially I imagine if you are already familiar with the novel. As a newcomer to it I found that once I surrendered to its surreal nature I found it totally mesmerising, magical, graceful and very funny in parts. The style reminded me in some ways of a previous Exchange production, Rats Tales as the stories played out before me. 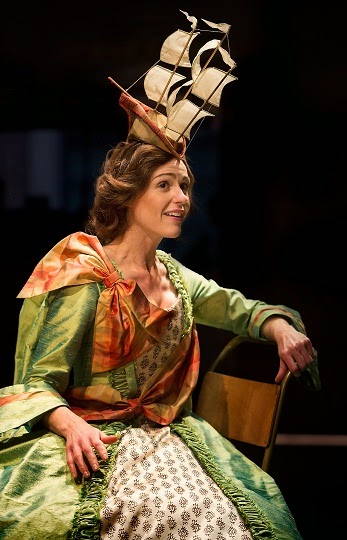 Suranne Jones in the title role was simply superb and totally captivating. She has just an amazing stage presence, and a great grace and balance to her portrayal. It really was a privilege to witness her clever and accomplished performance in the intimate setting of the Exchange.

This was a wonderful production. Clever, almost exhausting to experience, funny, touching and skilful. Bravo!
Posted by Alison at 15:00