Whilst I have seen quite a few productions of this Noel Coward classic, including a fantastic version at the Royal Exchange a few years ago, the prospect of seeing the legend that is Angela Lansbury, live on stage, in the role of Madame Arcati, found me pitch up at the Gielgud to enquire about the availability and affordability of a ticket for the show in its preview run. The best part of £50 later (gulp) I had secured a ticket for the front row of the grand tier, which turned out to be a great view, but extremely unforgiving on the knees! 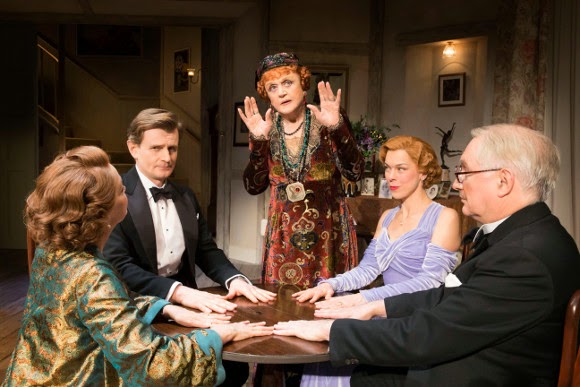 This is an excellent production, and made for a very enjoyable night at the theatre. Wilde’s play is a classic for a very good reason. His writing is sharp and witty, the plot is pacey and fun, and it definitely stands the test of time.

Lansbury is predictably fabulous in the role of the flamboyant and eccentric medium. She has enjoyed an amazing career on both stage and screen, spanning over 70 years, and winning many awards. Her biography in the programme is quite awe inspiring, appearing in over 60 films, on stage in numerous plays and musicals and having an extensive television career including, of course, 12 years as Jessica Fletcher in Murder She Wrote. Now 88, she shows no signs of slowing down, in the last few years she’s starred in at least three Broadway shows and toured Australia in Driving Miss Daisy, and now reprises a role she performed on Broadway in 2009, to mark her first return to the UK stage in 40 years. It is an absolute privilege to get the chance to see her, and she brings great energy and fun to the role. It goes without saying she’s an extremely talented performer, but she is also a very generous actress working as a true member of the ensemble cast.

Understandably, this production has been marketed very much on Lansbury’s casting and that is what has drawn the majority of the audience in, evidenced by the cheers every time she entered or exited the stage, occasionally drowning out the other actors lines. Whilst possibly the most memorable, Arcati is not actually the main character in the play, and an excellent cast has been brought together for this production.  I especially loved the pairing of Charles (Charles Edwards) and his second wife Ruth (Janie Dee), and Patsy Ferran, in her professional stage debut as the maid Edith was hilarious – what a start to a career!

All in all, and despite the balcony related bruises I still sport, a brilliant and memorable night and a great production of this witty play. And an absolute treat to see such a well-known and accomplished actress take to the stage with the energy of a lady half her age! 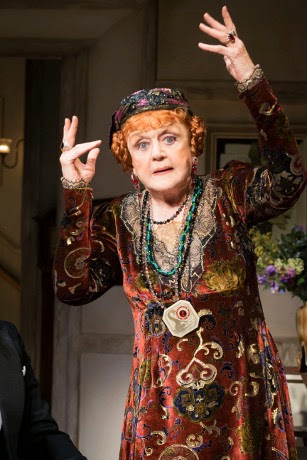