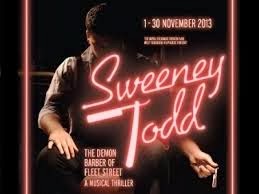 The Royal Exchange’s latest offering is a co-production with the West Yorkshire Playhouse bringing us Stephen Sondheim’s gruesome musical Sweeney Todd: The Demon Barber of Fleet Street. I love Sondheim and was excited when I saw this in the season announcement, but it does feels like an unusual choice for the Exchange, not known as a regular home for musicals. In fact I think the only one I have seen in the ‘pod’ is Sex, Chips and Rock & Roll, which must have been around seven years ago
When the production was first staged at the West Yorkshire Playhouse it had the critics raving and received national press attention, no mean feat with our the London centric ‘national’ press. To bring it to the intimate, in the round setting of the Exchange the production has been restaged, and new elements of design and direction incorporated. This must have been quite a challenge for all concerned, for example I read that the cast were performing the play in Yorkshire at the same time as rehearsing the Manchester version, which must have been totally exhausting. 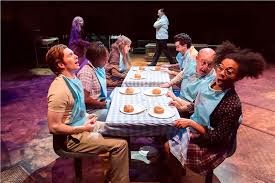 Most versions I know of, including the Yorkshire version of this production, use some form of trapdoor for body disposal, so I was interested to see how the Exchange, with no under stage area, would tackle this challenge. Without spoiling things for anyone yet to see it, the solutions are effective, allowing for a very efficient despatch of the victims.

The decision to set the action in a grimy, depressed Thatcherite era is a bold one. Whilst I'm not overly convinced by the fit of the initial asylum setting, this does emphasise the dark and grisly overtones of the piece and allows for some striking performances from the chorus, Joshua Manning and Eleanor Fanyika particularly standing out for me. 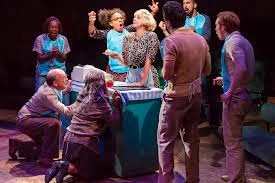 The production captures the gory nature of the tale excellently, to the extent that, if you manage to bag a banquette seat, I wouldn't wear your best designer wear just in case some of the literally bloodthirsty action heads your way. And whilst the horror of the tale is highlighted by the setting and characterisation, there are lighter moments that are excellently done, Lovett and Todd's 'A Little Priest' just before the end of the first act is a gloriously lascivious routine with plenty of pie action, that the actors clearly had a ball delivering.

Of the central cast, Barbara Drennan, as the Beggar woman is a delightfully mad old hag, utterly convincing in the role. And Don Gallagher as the perverted Judge Turpin, delivers a very unsettling portrayal that makes you very glad of his ultimate fate. 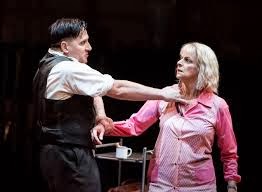 The pairing of Gillian Bevan and David Birrell as the central characters of Mrs Lovett and Sweeney Todd is just fantastic. Both give such energetic and skilful portrayals and the complexities of their characters and the journeys they, and their respective sanities, take is deftly portrayed. Quite apart from the acting performances, both the leads, and actually the whole ensemble, give astounding vocal performances which are highlighted further by the intimate settings of the theatre.

I was totally blown away by the scale and ambition of this production. Goodness knows how they managed to shoehorn such an epic production into such a relatively intimate setting, but they managed it, and it makes for an awe inspiring production and a memorable experience. Who needs London when two of our great Northern artistic venues can collaborate to create something this special?