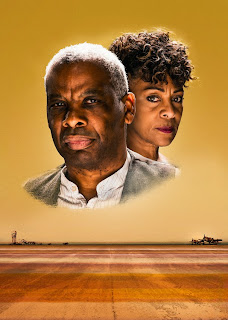 Ah, days of my youth! All My Sons by Arthur Miller was one of my set texts at A Level, and looking round at the audience I'm not the only 40something re-living their schooldays, a sight that serves to remind me I'm not actually as young as my inner self often assumes!

I fell in love with Miller's writing in my school days, and over the years have seen many productions of this play. These have ranged from the sublime (David Suchet and Zoe Wannamaker at the Apollo Theatre in London in 2010) to the ridiculous (an amateur version our English teacher Mr Cragg took us to in sixth form in which Chris appeared to be being played by an over-varnished Thunderbird, and at which we spent much of the play stifling giggles!)

This production has been brought to the Royal Exchange by Talwa Theatre Company, whose last offering here was the wonderful Raisin in the Sun in 2010.  Talwa was established to create artistic opportunities for actors from minority ethnic backgrounds and here it brings together an all black cast to bring to life this iconic play and more than demonstrates that casting decisions can and should be a little more broad as there is some amazing talent on display here that tells the story well. 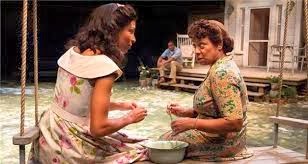 A very fine cast has been brought together and give impressive performances. Don Warrington and Dona Croll work well together as the central characters Joe and Kate Keller, both in denial about events of the past that are just too hard to face. Whilst all the cast are excellent, an actor that really stood out for me was Bethan Mary-James as Lydia, a relatively small role but one that she brought something special to. I suspect we are going to see a lot more from her in the future.


If you read an Arthur Miller play you will find that the stage directions are very detailed, it is almost like reading a novel. I suppose this means that there are very few choices available in the interpretation of a piece when bringing it to the stage. This play is also very much set in a specific time and place in America. Because of that, and the fact that I know this play so well, it is hard not to judge it against other versions I have seen rather than just taking it at face value.

For me, the pace, especially during the first act, felt a little slow and laboured and the emotions on display were very measured and restrained. This is a complex story as the characters circle around the central truths that are to surface and shatter their comfortable lives. But in the first act especially, to me it seemed a little one level and plodding.

The performances and staging are undoubtedly great, and if it was my first experience of the play I am sure I would have had a different response. It has been getting very good reviews from the critics. But whilst the central story loses none of its impact, this production left me feeling strangely unmoved, not what I was expecting at all.