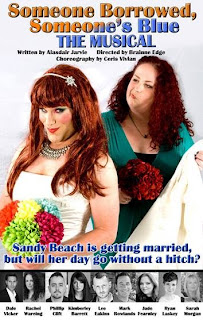 This new full length musical written by Alasdair Jarvie and produced by New Attitude Theatre Company started its life as a play performed as part of the ‘Not Part of’ Festival in 2006, but has been expanded and glammed up for this 2013 musical production. I’ll be honest and say that I came along to this not thinking it would be my cup of tea, and in a bit of a mood after a tough day. However, I am happy to admit I was wrong, having been completely won over by the sheer exuberance of it.

The story concerns Sandy Beaches, drag artist extraordinaire, who, in her opinion does the best Cher act this side of Manchester, in fact she does a better Cher than Cher herself these days. Life is on the up for Sandy, as well as having just secured her own chat show on MTV (Manchester and Trafford television), her boyfriend Michel (he’s from Cheadle Hulme you know!) has just ‘proposed’ to her and she has a wedding to organise. Clearly she’s far too busy to take care of the details, so she turns to her sister Wendy to take on chief Bridesmaid and Wedding Planner duties. What follows is a sharp witted, well performed tale of love, lust, family rivalries and ambition, told with a big heart and an extra dose of ‘fabulous’.

The performance I saw took a couple of numbers to get going, but it was the opening night and I think some of the initial wobbles were down to nerves, as once it got into its stride it was full of laughs, enthusiasm and enjoyment. The songs had been chosen well and had been incorporated nicely into the action, and the direction and choreography made the most of 3MT’s pocket sized stage.

Some voices were stronger than others, but all the cast committed with confidence to their roles. I was particularly impressed with Rachel Waring as Wendy, combining a powerful voice with a great performance, be it in the comedy sparring with her sister, the drunken hen night, or the more touching moments of the story. Many of the high points of the play centred on her character, such as the hilarious ‘Believe’ and ‘Choices’, the tender ‘Beautiful’ and the powerful ‘Because of You’.

Lee Eakins as Lorenzo also impresses, as he worships Sandy from afar, and Dale Vicker delivers a delightfully acidic Sandy, most especially in his scenes with Wendy, but also shows the more vulnerable side of the character when his mother Veronique (excellently portrayed by Mark Rowlands) comes to town.

Special mention should also go to Sandy’s Be-aches (Jade Fearnley, Ryan Laskey and Sarah Morgan) the chorus, clearly having a whale of a time on the stage, adding some fabulous comedy moments and dance routines to the piece, and also being the hardest working stage hands around!

In their pre-show publicity, New Attitude tweeted some previous feedback the script had received from the Bruntwood judges, including the comment that they thought it had ‘one too many cock jokes’. If I’m honest, I’d agree with that, not because I’m a dreadful prude, just because there are far funnier quips in the play and I think it would benefit from the loss of a few limp cocks (arf arf).

The show ends on an absolute high, the audience were swept along by the sheer joy of it

and had there been a bit more space there would undoubtedly have been dancing in the aisles. All in all a fun and well put together story, a great cast, lots of laughs and a really good night out.
Posted by Alison at 13:22