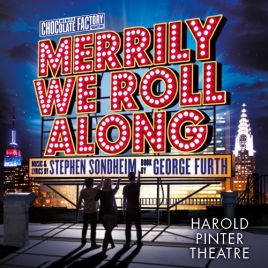 I make no secret of the fact that I love Sondheim. His witty, clever writing can make you roar with laughter one minute, and weep the next, and this musical is one of my favourites. It's over 20 years since I last saw it on stage. If memory serves me right that production starred Paul Kerryson and Tracie Bennett and was at the Library Theatre in Manchester. I've since listened to the score countless times and know most of the words. You get very protective of a show when you know it and love it, but I had no fear that this production would be a let-down, having seen the universal praise heaped on it from every direction.

This production originated at the Meiner Chocolate Factory, before transferring to the West End, and is directed by acclaimed musical theatre star Maria Friedman, an actress who has a long association with the work of Sondheim.

An amazing ensemble cast has been assembled for this production who worked seamlessly together to deliver a wonderful show from start to finish. Beautiful voices, great choreography and staging, comedy, pathos - yes I'm gushing and deservedly so, it was an absolute joy.

Jenna Russell's Jane was a brilliant performance. It goes without saying that her voice was stunning, as were all the casts , but she combines this with an extremely skilful portrayal of the (reverse) progression of the character from the frumpy, embittered Jane we see at the start of the show, to the hope-filled young lady that she started out as. She deserves to win many awards for this performance. I was blown away by it. 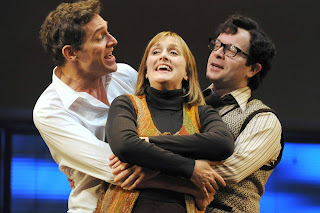 Damian Humbley as Charlie was equally stunning.  I have raved about him before, having seen Company at the SheffieldCrucible in 2011. He is a very talented performer indeed and his voice is simply wonderful.  Mark Umbers as the third of the central trio Franklin, is equally talented, again showing the various stages of Franklin's journey from the brash Hollywood 'player' back to the idealistic writer starting out in the industry. All three work well together to give very rounded performances, portraying both the comedy and the complexities of their characters and their friendship at the various stages of their lives.

The set is simple but extremely effective, which is cleverly transformed via pacey and well-choreographed scene changes which move the action seamlessly onwards (or backwards to be more precise) and of course a gorgeous score. And as I said before, what a cast, all seriously talented and working as a true ensemble.

There isn't a single weak point to this production. This is simply Sondheim I have seen and I had a stupid grin on my face from start to finish at the sheer joy of seeing something this perfect, even when I had tears rolling down my face at the sad bits the grin refused to budge. The only disappointment was there doesn't appear to be a cast recording, and I would love it if this production could have been preserved for posterity in that way, it truly deserved it.

A completely justified standing ovation was given at the end of the show, the audience didn’t want it to end, and if I lived in London I would have been booking for a repeat visit straight away. Truly memorable, and accomplished, everyone involved in this should be very proud.