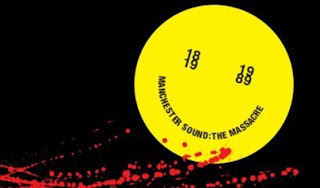 Lowry they announced that whilst they were homeless they were going to produce three site specific productions. 2011 saw the excellently realised Hard Times at Murray Mills in Ancoats, 2012 the magical Manchester Lines on the third floor of an office building at First Street. This year's third and apparently final venture is Manchester Sound : The Massacre, at a secret location in central Manchester, which promised to combine elements of the 90's underground rave scene in Manchester, with the Peterloo massacre of 1819, a concept that seemed bizarre and incongruous at first, but that turned out to be an amazing and unforgettable experience, talk about ending on a high!

Writer Polly Wiseman has done an excellent job of bringing together two seemingly diverse eras, and finding the similarities in themes by concentrating on the human motivation and impact. The gentry's actions to quell the gathering of the masses in Peterloo is shown to have parallels with the government's moves to outlaw the rave scene in late 80's, and the focus is very firmly upon the individuals motivation and reaction to these two movements.

Initially the two threads of the story are kept separate, but increasingly they entwine and the characters begin to interact, both with each others worlds, and each other directly, sometimes in humorous ways, and sometimes in extremely touching and powerful exchanges, acting as a call to arms for the young characters to find a sense of purpose and direction, to find something in life to stand up for.  The final scene was extremely powerful and inspiring and almost had me in tears.

The experience itself was quite unique, the audience was gathered in a car park location nearby and were soon

joined by cast members as we waited for news of where tonight's 'rave' would take place. I think it's fair to say the audience on the night I attended were the most unlikely looking bunch of ravers going, but the main and community cast did a brilliant job from the start of getting us into the mood! Once instructions had been received, we were guided in a very roundabout route to the location of the gathering, gaining bemused stares along the way from the early evening bystanders, and were admitted to the location by the door crew, where pounding music could already be heard.

The set for the production has been built over three floors of an old building in central Manchester, there are hints dotted around of its former use in the garment trade, and the design is simple but versatile and very effective. The main space on the first floor is where the majority of activity takes place, and in a similar way to Hard Times, the audience mingle with the action, moving around of their own accord as different scenes take place. There is some gentle ushering incorporated into the production to move people between floors, but it is managed in such a way as to not break the mood of the event at all.

Each cast member takes on two roles, one from each era, and this is done so seamlessly that it actually took

me a little while to realise it was happening, especially with Rachel Austen playing Allegra/Jemima, who I was convinced was two actresses for a while! The whole cast was strong, but I was particularly struck by the performances of Rachel, Stephen Fewell as DJ Liberty/ Henry Hunt, Leah Hackett as Evie/Lizzie and Janey Lawson as Debbie ( the door whore)/Mary. Each managed to portray the differences and similarities in their individual characters excellently. Mention should also go to the brilliant community company that has been formed for this production who brought things together wonderfully and gave great performances.

All in all I found this a unique experience from start to finish, I danced, I popped pills (which 'might' have been Skittles), I was amused and moved to tears, and took away a strong message about the need to stand up for a cause, so if you see me marching the streets with a placard campaigning for more of this kind of innovative site specific theatre from the LTC ( or whatever it is going to be called when it moves to its new 'home') then you'll know why!