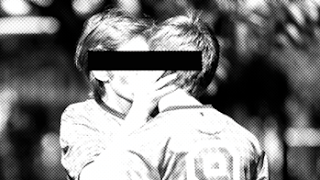 It’s been hard to fit in much 24:7 stuff this year as the first weekend clashed with my Manchester International Festival volunteering responsibilities, but I’m so glad I managed to find time for this absolute gem of a show.

In the true spirit of football this Working Progress production is a team effort, written by Rob Ward and Martin Jameson, with Ward taking on the sole character of Kyle, and Jameson directing, they have together created an incredibly accomplished piece of theatre. 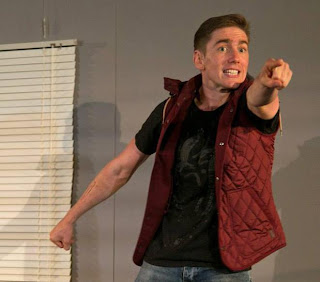 Kyle is a gay man and a passionate football supporter, he also makes a living as an escort and through this starts a relationship with a professional footballer.  Ward is the only performer in this play, as he recounts events of the last few years, and it’s a performance and a half. So much energy, commitment, perfect timing and finely observed characterisations you feel like there is a stage full of characters not one. It’s exhausting to watch let alone perform! There is a great deal of humour in the play, but also some incredibly touching and upsetting moments too as you see the journey develop. 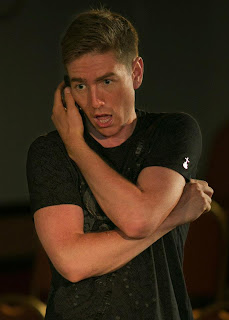 doesn’t go down the standard route of Kyle having hidden his sexuality from his family and friends, although he has been a little more economical with the truth about his career choices. His friends know he is gay, and he is still one of the lads, down the football on a Saturday. His parents are less comfortable with the position, but still grudgingly accepting of it. It feels very real. This is contrasted with the issue of homophobia in professional football and how as the relationship between Kyle and the footballer develops it has to be hidden and denied with heartbreaking consequences.

The creators of this piece have achieved something really special with this play, it really touched me and affected me for long after the performance had finished. There is just so much packed into the one hour running time. I laughed, and I’m not ashamed to say I wiped away a tear as well. And Rob Ward's performance is astounding.

Seriously, with All The Bens last year, and this for 2013, if 24:7 don’t start giving out free hugs at the end of performances soon there will be trouble!
Posted by Alison at 13:06