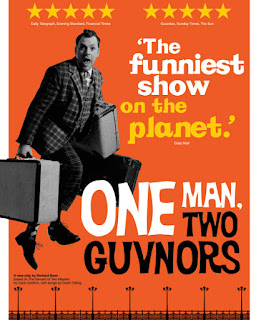 Finally I got to see the much talked about One Man Two Guvnors when it visited the Lowry for the second time. I had tried and failed to get a ticket for its first visit to Salford, when James Corden was at the helm, so when I saw it was returning I was straight on the phone to snaffle myself a good ticket. ‘Good’ turned out to be second row stalls so I was well placed to see the action unfold, although it did make for slightly restricted views on occasion.

There has been so much hype about this show since its first outing at the National Theatre in 2011. It has since had two lengthy West End runs (one still ongoing), a Broadway transfer and this visit is part of its latest UK and international tour. Despite this, I had pretty much managed to avoid any detail of what the show was all about so arrived with no preconceptions, but expectations of some much needed fun, and it certainly didn’t disappoint in that respect.

The play is actually based on another piece , The Servant of Two Masters by Italian playwright Carlo Goldino from 1746, but writer Richard Bean, sets the action in 1960s Brighton. Frances Henshall, an out of work chancer, manages to secure jobs with two Guvnors, and there follows a series of hilarious and increasingly complex set pieces as Frances attempts to fulfil his responsibilities whilst hiding the existence of his dual role to each boss.

This play doesn’t so much break the fourth wall, as do a pratfall onto it, send it crashing to the ground and then do a tap dance on it. The audience interaction is delivered to engaging and hilarious effect, however, I won’t expand on this aspect as, if, like me, you had managed to avoid all key details of the events of the play, the surprises are delightfully done. 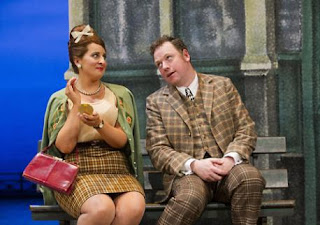 At Salford Rufus Hound takes the central role of Frances Henshall, and does not disappoint. The character is on stage almost constantly, and his energy, timing and engagement with the audience is exemplary.  Edward Bennett, as the foppish ‘Guvnor’ Stanley Stubbers, also gives a wonderful comic performance. I last saw Bennett playing Hamlet in London, as understudy for David Tennant who was out of action with a back problem. He proved himself to be a fine classical lead actor there, and it is great to see he is just as fantastic in an all out comedy role.

The other role that is worthy of a special mention, although the whole cast is excellent, is the character of Alfie, the ageing waiter. But here is where the programme lets me down as I’m not entirely sure who plays him! Whilst I was aware, due to a note on the Lowry website, that Amy Booth- Steele was taking the role of Dolly for the Saturday performances (rather than the heavily marketed casting of Jodie Prenger for the Salford run), I glimpsed as I was leaving one pinned up notice by the box office suggesting that the role of Alfie may have been covered by a member of the ensemble. So let’s just say that this portrayal, which may or may not have been by Peter Caulfield, was an hilarious highlight of the show, done with exemplary timing and skill. Poor show on the National Theatre though on being too stingy to photocopy a ‘cast for this performance’ insert for the pricey programmes.

There are excellent musical interludes from the start (in fact, don’t be too tardy taking your seats as this starts a good ten minutes before the play) from band ‘The Craze’, whose witty and lively songs, by Grant Olding, set the mood of the piece excellently, have the audience on board from the start. This element also ensures that no momentum or audience engagement is lost during scene changes. I especially loved the way the main characters were incorporated into some of these musical pieces to brilliant effect.


All in all, this is a show that definitely deserves the hype, and ensured the audience had a wonderful time. Whilst it was full of surprises for a first timer, I’m sure that it would take repeated viewings and I would definitely go and see it again.