I certainly chose well for my first 2013 visit to the Lowry Studio. Hidden, written and performed by Laura Lindsay and Peter Carruthers was a gem of a show and very worthy of the capacity audience that it had attracted on this cold January night. Programmed as part of The Library Theatre’s Re:Playfestival, which brings together the best fringe productions from across the region in the previous 12 months, this piece, a writing debut from both creators, was originally performed in 2011 at Joshua Brooks, and has been further developed, with the help of Director Martin Jameson, for this outing.

The piece is a dark comedy revolving around six characters, and through a series of monologues and duologues, we share their inner worries, insecurities, obsessions and dreams, the parts of us that are normally kept hidden behind our public face.

The writing is very strong, with very finely observed detail that was easy to identify with, extremely funny at times, such as the e mail that all of us have really wanted to send to our boss, which had the audience in stitches, but also incorporating some darker themes and extremely touching moments.  The way the lives of the characters interconnect in various direct and indirect ways is also nicely done, and as an audience member it is intriguing making the connections as the piece progresses. 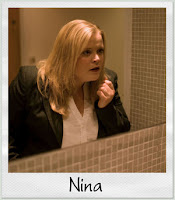 Laura Lindsay and Peter Carruthers give impressive performances, each taking on three characters. Each character performance is well defined, and finely crafted, with some lovely subtle details. Whilst the characters are varied, they never fall into the trap of becoming caricatures, and there is plenty to identify with in each of the portrayals. It’s quite awe inspiring to see how good actors can transform themselves before your eyes to take on different personas, and it’s done excellently here. 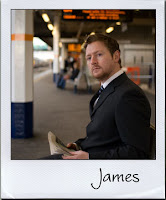 All of the characters were engaging, but I think my favourites were James, the sharp businessman, breaking the rules of commuting on the 8.10 to Victoria to quite hilarious effect, Nina, the efficient strategist hiding her inner conflict regarding parenthood (as a childless auntie / godmum myself I particularly identified with the section on being good with kids, but also finding them a bit tiresome after a while and glad they could be given back! Go on, we all think it, but no-one is allowed to say it!). My absolute favourite though was the Scottish supermarket worker Claire – outwardly all brash, hilarious good time girl, but covering up some darker insecurities and a troubled past.

This play worked for me on many levels, it had plenty of laugh out loud moments, many of the observations were very easy to identify with, there were some darker themes, not everything was neatly resolved, and it stays with you long after the actors have taken their final bow. Combine that with stonking performances and it made for an excellent night out.

Re:Play festival continues into next week and if you are in the area I’d highly recommend checking it out, especially my 2012 fringe highlight, the wonderful All The Bens.
Posted by Alison at 02:33