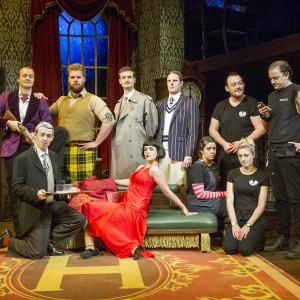 There's not a lot for a theatre obsessed person to do on a Sunday in London. A few of the crowd pleasers have matinees, but a Sunday evening in Theatreland tends to be very short on theatrical diversions. However, The Play that Goes Wrong, bucks this trend with not one but two Sunday performances

At the Lowry this Christmas I saw the extremely funny Peter Pan Goes Wrong by the same people behind this play, Mischief Theatre Company, and I did wonder if it would just be more of the same, but, whilst elements are shared - collapsing scenery, increasing on and off stage chaos, and a very real danger that the audience will do themselves an injury from laughing, they are actually very different productions and can both be enjoyed individually. 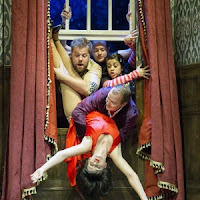 The play bills itself as Noises Off meets Fawlty Towers and the roots of this piece are definitely in good old fashioned slapstick and farce. The action concerns the Cornley Polytechnic Drama Society's attempt to stage a 1920s murder mystery Murder at Haversham Manor, but whatever can go wrong does, with increasingly chaotic results.

An energetic and extremely hard working cast deliver hilarious performances from the outset ( in fact from before the outset so don't be too tardy getting to the theatre). Whilst it may look chaotic, it takes a talented set of performers and a lot of work to deliver that level of chaos precisely and without serious injury! 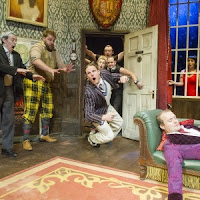 The play won an Olivier this year for best new comedy, and it is well worth checking out if you want a couple of hours of sheer entertainment and fun. Highly recommended.

Currently booking through to February 2016 with plenty of reasonably priced tickets and discounts for early bookings.