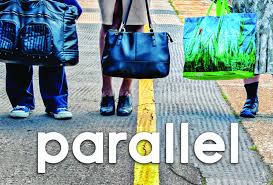 I was very glad to be back at the lovely Hope Mill Theatre to see Parallel, the latest work from writer / performer Laura Lindsay and Black Toffee Productions. Having enjoyed the last work I saw from them, Hidden, I had been looking forward to this show for some time. I was not disappointed.

The play has an interesting opening concept - which of the three characters the cast portray is decided by a roll of the dice. It’s a fascinating twist and echoes one of the themes of the play which explores whether the roles we play in life are by chance or by choice. It must also be quite a challenge for the cast, as each only has a short time after the dice roll to ‘inhabit’ their characters, but it is certainly one they rise to, with each actress portraying their assigned role with such clarity and detail that the audience is completely engaged in the unfolding story. 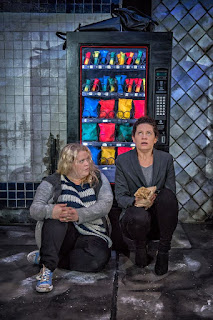 On the night I attended the dice rolled a two, meaning that writer Lindsay took the part of Beth, a girl beginning to fall down the cracks of homelessness, Emily Spowage was Anna, a pressured Business Consultant struggling to cope, and Arabella Gibbins was C, a homeless lady with many challenges, but arguably the most together of the bunch.

The action takes place in a station late at night. Anna has just missed the last train, Beth needs some peace to think as her options are running out, and both are intruding on C’s space. Whilst this play explores the issues surrounding homelessness, to describe it as a play purely about homelessness would be to do it a disservice as it is much more complex than that. It touches on the paths we take in life, whether our lives are governed by choice or circumstance, and how the assumptions you may make about people are often wrong.

The three disparate characters are played so cleverly by the cast and their thoughts and experiences connect with the watchers on many levels. Each actress brought a real depth to their character, allowing the audience to invest in them and find things to identify with in all of them. The intelligent writing and well chosen direction were extremely effective, gradually uncovering the stories of all three ladies and challenging your first impressions. All were written with such a finely judged detail, they felt real and identifiable, sometimes a little too close to home if I'm honest! There were elements of both Beth and Anna’s lives that I could identify with, but weirdly the person whose philosophy I most admired was the one who you initially on meeting you may have dismissed or avoided. Despite C's situation she seemed the wisest and most capable of the group. 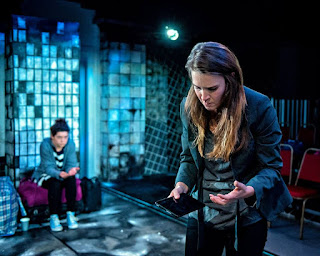 Frequently hilarious, the writing and performances were also nuanced and engaging, full of clever detail. Not afraid of silence and naturalism, the production allowed a gradual development that was all the more effective for its calm pacing, totally absorbing you in all the characters and their stories, drivers and philosophies. The fact that each of the actresses gave such fine performances was a real credit to their talent and it would be fascinating to come on another night and see a different roll of the dice.

All in all a fascinating, intelligent, thought provoking, accomplished  and compassionate production, that I thoroughly enjoyed from start to finish. Everyone involved in this should be very proud of it.

Still can’t believe that Anna didn’t get the I Spy though, it was so obvious…………
Posted by Alison at 12:28