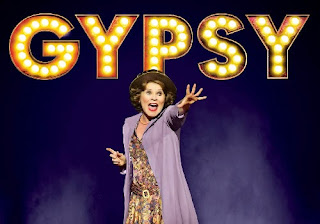 I was so excited when I managed to get a ticket to see Gypsy at the Savoy Theatre recently (despite a small battle with ATG's booking system that really doesn't like selling single tickets anywhere near the stage). It has to be one of my favourite musicals, with music by Julie Styne and lyrics by Stephen Sondheim, it is loosely based on the memoirs of striptease artist Gypsy Rose Lee, from her start in vaudeville, driven by the vicarious ambition of her mother Rose, to her eventual fame as a burlesque star.

It is considered by many to be one of the greatest American musicals, and has been immortalised in film twice, first in 1962 with Rosalind Russell taking the central role of Mama Rose ( with a little vocal help from Lisa Kirk), and then in 1993 with Bette Midler, and I believe a third film is in pre production. Bearing in mind this popularity, it is a little surprising that a West End production has not been seen since 1973.

This London transfer of last years acclaimed Chichester Festival Theatre production reunites Imelda Staunton, who won an Olivier for previous Chichester transfer Sweeney Todd, with that production's director Jonathan Kent, and I wouldn't be at all surprised if many more awards came hurtling their way for this fabulous production.

The wonderful set makes full use of the depth of the Savoy stage, with beautifully detailed sets whizzing in and out, perfectly portraying the various scenes. And the costumes are gorgeous and in some instances very very clever, particularly Louise's quick changes and the burlesque dancers outfits. 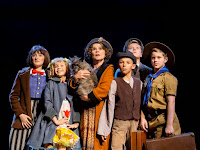 The music is of course fantastic, from the overture onwards every piece is delivered with aplomb by the talented orchestra and performers. The whole cast are excellent and I can't mention them all but there are a few standout performances. The actors playing the young versions of Baby June and Louise were excellent ( Isla Huggins-Bar and Holly Hazelton at my performance) and there is a very clever transition from young to grown up versions.

Lara Pulver as the adult Louise gives a cleverly nuanced performance as she gradually comes out of the shadow of her mother, and her longing for a stable and settled life, and has her moment in the spotlight. The very clever transition scene from shy and frightened Louise pushed into filling a vacant burlesque number by Mama Rose, to the triumphant success of Gypsy, is excellent, and a real credit to the costume department as she goes through multiple outfits in the blink of an eye. And Julie Legrand as Miss Cratchitt / Electra is an absolute treat.

But of course this production belongs to Imelda Staunton who gives the best and most breathtaking acting and vocal performance I think I have ever seen. I knew what a fine actress she was already, from her many film and TV roles, and having been lucky enough to see her on stage last year in Good People, but the quality and energy of her performance as Mama Rose is just flawless. From the fine comedic detail, such as her interjections during the audition of June , Louise and the Farmboys, to the power of the big show-stopping numbers, her talent is extraordinary. The act one closer, Everything's Coming Up Roses, as Rose's unhinged ambition possesses her, was quite breathtaking, and her heartbreaking performance in Act Two closer Rose's Turn brought me to the verge of tears.

The ensemble cast finale brought a joyful conclusion to an historic production I will remember for a long long time and am so happy to have witnessed ( and from the second row stalls too - I truly am a very lucky girl!) Never has a standing ovation been more earned. I predict awards aplenty for this amazing production and it deserves every accolade that comes its way. An absolute triumph of a show. 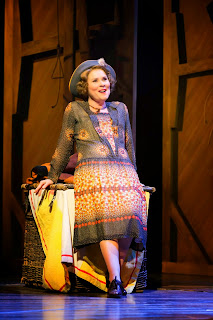