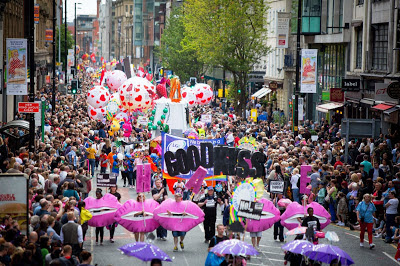 Wow! Another Manchester Day Parade has happened and it was awesome. The crowds seemed bigger than they have ever been, and the amazing creations and enthusiasm from the participants just takes your breath away. Its such a privilege to be part of. 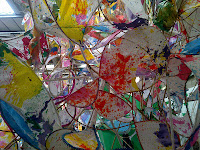 Wow Workshop, a space that parade producers Walk The Plank organise for artists, volunteers and community groups to work on their entries. There have been times when I've been incredibly tired juggling work, other commitments like Manchester International Festival volunteering, and family and friends ( who have been somewhat neglected, sorry!) but I wouldn't miss it for the world. I often get asked why I do it, and I don't always give very good answers, so I thought a blog post might help to explain.

I have been volunteering for the Parade since it's inception in 2010. The previous year I had been a volunteer for the Manchester International Festival and loved being part of something arts based, and the buzz of a major event. As part of that I worked as a marshall on a play that was being produced by Walk the Plank and it was a brilliant experience. I was keen to do more events volunteering, and be involved in the arts, and looking for opportunities. Whilst I was on holiday at my cousins house in Australia I was reading the Manchester Evening News website and saw this new parade was going to take place, produced by Walk The Plank, to celebrate Manchester and its people. The article said  they were looking for volunteers to get involved. I signed up there and then, from a hideously hot Perth, and they've never been able to get rid of me since!

So to answer the question why each year I keep coming back, and give an increasing amount of my spare time to the Parade? Well on consideration it's a number of reasons, some purely selfish! 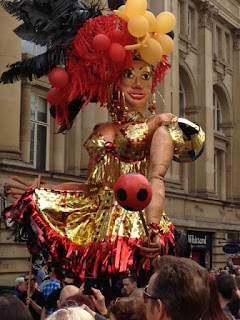 - I get so much satisfaction from creating things, but I don't think of myself as particularly creative, so it's great to work with an artist who has the ideas, can show you the techniques, and then lets you get on and make something. Over the last four years I've worked with quite a few of the artists on different items such as cabbage hats, hooped skirts, rocket ships, huge puppets, ribboned backpacks, comedy sharks, Lancaster bombers - and picked up loads of skills and confidence along the way. And you feel so proud when you see something that you made, even if it is just a tiny part of a structure, in all its glory on parade day. In fact I think my friends get sick of me pointing at pictures and saying 'i made that backpack/shark/crown etc' 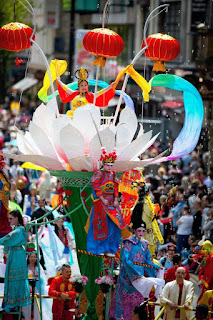 - I have worked with and chatted to some amazingly diverse people that I just wouldn't have met in my day to day existence. It has really opened my eyes up to a much wider range of life experiences, and I think it's made me a better and more understanding person as a result. And I've seen how much involvement in the parade gives back to some of the community groups in terms of a sense of pride in what they have been able to create.

- I love ' my' Manchester, and it's brilliant to be part of something that celebrates the people, diversity and energy of my ' home' ( ok , I'm from Stockport, but I consider myself Mancunian!) and gives something back to the city and the communities that live there. 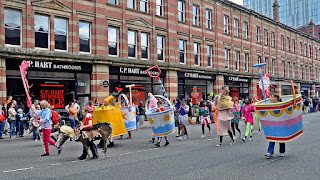 This year's parade day was amazing - colourful, energetic and huge! Seeing it all come together is awe inspiring and makes all the hard work worth it. Walking out on to the packed streets of Manchester ( dressed as a giant bucket and spade, I was a last minute stand in and i still have the bruises to prove it) and seeing thousands of smiling faces is a fantastic experience. We had more spectators this year than ever before, and the parade entries just get more ambitious and creative year on year. I don't have many photos of the parade myself yet ( although I did have friends under orders to take them) but there are some great photos online, a couple of good Flickr sites are here and here. 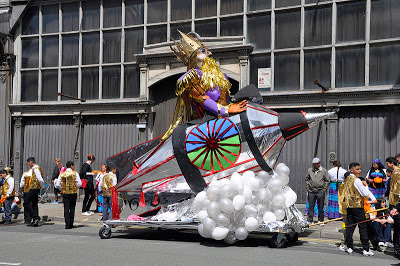 The Manchester Day Parade is a fantastic free event, that gives back so much in terms of the groups and individuals that are involved, the local community, the spectators who attend, and the local businesses who benefit from the additional trade. It is also unique in the way it brings together an incredibly diverse range of people in such a joyous and collaborative way. Long may it, and my involvement in it, continue! 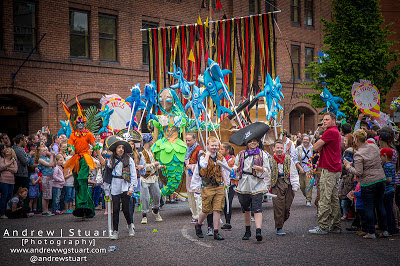