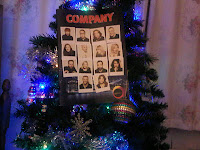 Well I certainly ended my 2011 theatregoing experience on a high, with an impromptu trip to Sheffield to see one of my favourite Sondheim musicals, Company, at the Crucible Theatre.
There really wasn't anything I could fault about this production, it was just a delight from start to finish. They had brought together an incredibly strong cast, it was brilliantly staged, had a wonderful set that allowed a great use of the space, and it was both funny in parts, and incredibly moving.
I loved Francesca Annis' portrayal of Joanne, and her drunken rant of 'Ladies Who Lunch' was just a delight. Samantha Spiro made a brilliant Amy and her 'Not Getting Married' was quite literally breathtaking (how any actress gets through that song without turning blue is beyond me!), and Damian Humbley as Harry has a voice that could melt Sheffield steel! But all the cast were just a delight.
Daniel Evans' portrayal of Bobby was wonderfully observed. Initially you see him as quite a shallow character, but there was a really clear point in the production, during the bouncy 'Side by Side / What Would We Do Without You' where you saw the depth and complexity of his emotions laid bare and your heart went out to him.
By the closing number 'Being Alive' I had a tear in my eye, party because of the emotion of the song, and partly because I just didn't want the show to end. I make no apologies for gushing, it was a gush worthy production and a great way to round off the year.
And on a side note, I don't know why I haven't been to Sheffield for theatrical jaunts before. Its incredibly easy to get to on the train, Sheffield itself seemed lovely (in complete contrast to the impressions I got on my last visit to the city for a uni interview quite a few years ago - actually when I realised how many years ago it was I felt ancient!), the Crucible staff are some of the most helpful and friendly I have come across and the ticket prices were amazingly good value. Looking at their exciting 2012 plans I suspect I'll be back!
Hope you like the festive picture - I can't tell you how long it took me to balance the programme on that tree!
Posted by Alison at 14:56